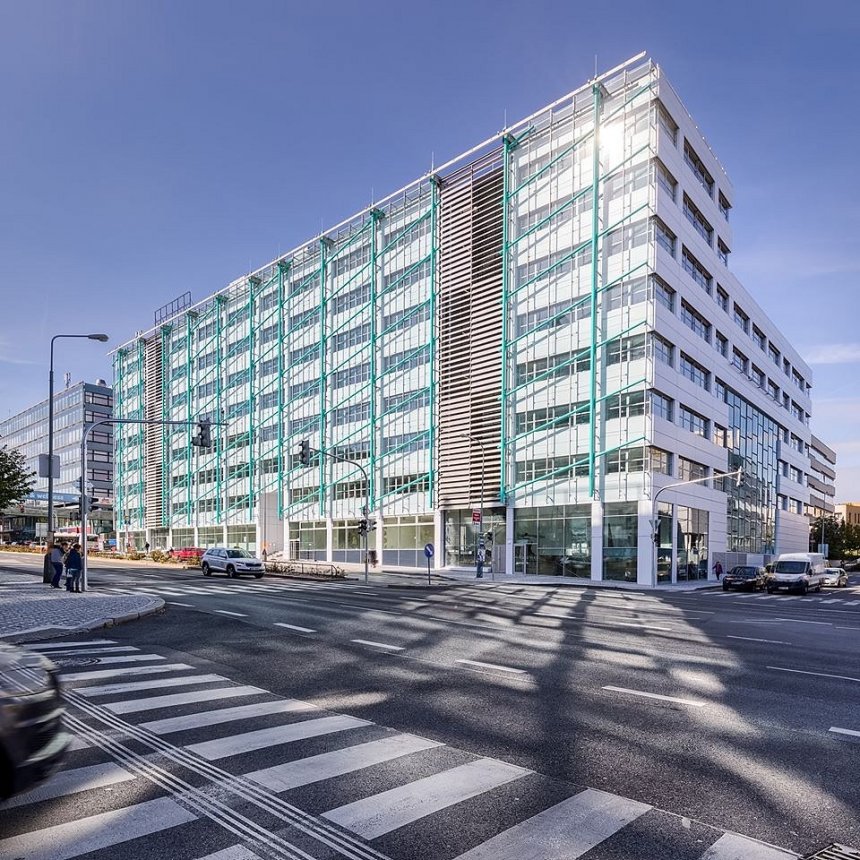 The sensitive and effective reconstruction of the interior and exterior of the office Building A in BB Centrum in Prague 4 won first prize in the prestigious real estate competition, the 2019 CIJ Awards Czech Republic in the category of Best Commercial Refurbishment. Building A was built in 2002, underwent complete renovations in 2018 and became the new headquarters for one of the leading Czech banks, MONETA Money Bank. The 2019 CIJ Awards Czech Republic ceremony took place on 28 November in Slovanský dům in Prague, where the winners of all the categories were announced. Lenka Preslová, the Sales Director of Passerinvest Group, which is behind the construction of BB Centrum, and Eduard Forejt, the Business Development Director, accepted the award on behalf of the company.

“Building A was in constant operation for 16 years. During that time the development of technologies has moved forward and the trends and requirements for a working environment have also changed. Because we want to make sure BB Centrum stays full of life, it is necessary to revitalise some of the buildings that were built earlier and to give them back their “prime” status. The development of the public space and the offer of services are also related to this. We consider our project’s first prize in the prestigious CIJ Awards to be proof that our efforts for the sustainability of BB Centrum are bearing fruit,” stated Vladimír Klouda, the Executive Director of Passerinvest Group, with regard to the award.

Building A in Prague’s BB Centrum has a total leasable area of 21,600 m2, underground parking for 390 cars and green rooftop terraces. In 2018, the building underwent overall reconstruction, which took place in cooperation with its exclusive tenant, the leading Czech bank MONETA Money Bank.

The most striking change in the reconstruction was the modification of the façade; the original plaster was replaced by smooth Alucobond panels in a white colour, while the steel construction facing Vyskočilova Street was emphasised with turquoise paint. A rooftop garden with an area of 1400 m2 was built on the 7th storey with gazebos, greenery and chill-out zones. Other green spaces are spread out in the glass atriums on the building’s ground floor. The clean and simple layout of the building was preserved, just like the upper glass part of the atrium, thanks to which natural daylight permeates through the entire building. The building is newly equipped with six lifts with intelligent destination controllers.  A striking and unmistakeable element is the colour façade lighting towards Vyskočilova Street. Another interesting element is the colourful waterfall from a height of eight floors in the atrium. 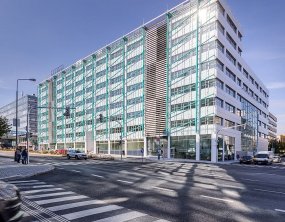 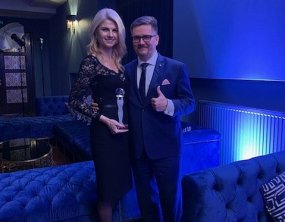